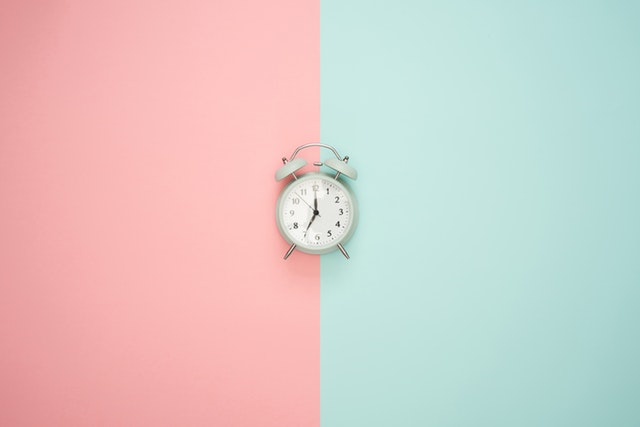 Our podcast episode with Laura Vanderkam, How to Feel Less Busy While Getting More Done, is one of our most downloaded episodes. This doesn’t come as a surprise to us given that the number one thing that new members of our Facebook community tell us they struggle with is time.

One of Laura’s key messages is that people should track their time, not for three years like she has(!), but just for a week or two, so that they can understand where their time is really going, not just where they think it is going.

So, being the well-behaved interviewers that we are, Jo and I tracked our time for two weeks before the interview.

I tracked my time in 30 minute intervals and found it relatively easy. The hardest part was working out how to categorise time when a half-hour slot was made up of lots of different activities. As Laura later told us, it doesn’t matter. Go with the vibe – what does it feel like you spent most of the time doing? Record that.

Here’s what I learnt. Stay tuned to hear Jo’s reflections next week.

My time sheet shows that I logged 22 hours of employed work during the first week and 35 during the second. The first week included a public holiday on a day that would typically be a work day for me, but which I took off. What’s interesting about these numbers is that the two weeks were not particularly busy for me. I wasn’t under pressure of impending deadlines, rather things were just ticking along nicely and relatively quietly. My guess is that if I track again these numbers are likely to be higher.  How much so I don’t know, but I am interested to find out. Such is the nature of flexible work that we often don’t really know how much we do work!

My time logs suggest that, excluding dinner, travel and bed time, I spent about 7 hours a week with my daughter Lilly. Given that I’d spent the entirety of 8 of the 14 days with her, I must have been doing something wrong.

Although Lilly and I had spent a lot of time together during those two weeks, the vast majority of it was just doing our ordinary life – baking cakes, impromptu dance parties, playschool, parks, reading (so much reading!). Perhaps because of this, nothing stood out to me as worthy of being noted on the log. Much like all the things that make up my work day are simply listed as “work”, these ones are simply listed as “home”.

What I hadn’t made much time for was what Laura calls “effortful fun” – the kind of fun that requires effort in planning and participating, but which stays in our memories and thereby helps to expand the feeling of time. Our one “effortful fun” activity was a Sunday morning breakfast, just the two of us, at a new local café by the ocean. I ordered Lilly a banana smoothie and I still remember the smile on her face when she realised the huge glass with TWO straws was for her. So simple and such a small amount of effort and change in routine, yet a memory that expands the feeling of time.

The lesson: we’re good at fun at home, but we could do with more of the effortful kind.

I’ve managed to get myself into the terrible habit of staying up late, so if you’d asked me how much sleep I was getting my answer would have been “not enough”. Well, as it turns out my average number of hours sleep over the two weeks was 6.7 hours. My long term average is probably higher as we had a couple of toddler-initiated parties in the middle of the night. (In other words, Lilly woke up and wanted to play. Party sounds much better than sleepless night, so we go with that.)

So I’m not doing too badly on the sleep front. I’ve recently created a self-enforced bed time of 10:30PM, so that should help pick up the average.

I wouldn’t be honest with you if I didn’t include this one.  As well as staying up late, I’ve also developed a nice little habit of scrolling social media for an hour or so before I go to bed.  These are recorded in my time logs, but what they don’t show you is all the little snippets of social media scrolling that I would have squeezed in here and there – waiting for the train, waiting for the kettle to boil … you know the kind.

Social media can be great, but other than in our Facebook community, I’m not a big sharer, so this mindless scrolling is something I need to stop. I’ve since been much more intentional about my social media use and have bought myself some new books to force myself to read those instead of my Facebook feed.

I plan on tracking my time again in a month or so. Let me know if you’re interested to hear how I get on with round two!